SickKids debuted their latest donor campaign with a powerful new video: Sick Versus Undeniable. Given the online response in my Facebook newsfeed alone, it could easily be mistaken for the latest Beyonce single. SickKids VS Undeniable is an action packed 2-minute video of powerful images, strong lyrics, and rich narrative themes based on a traditional story template that leaves anyone who watches it feeling empowered and inspired. It’s also the best example I’ve seen in awhile of effective storytelling.

Over the last couple of years, storytelling has become the ubiquitous term for anything and everything to do with communication, online marketing and content development. However, story structure, the thing that makes storytelling so effective, has either been lost, forgotten or never truly understood.

Over centuries, our neurobiology has evolved to respond to stories with the release of the hormones cortisol, which causes us to pay attention in moments of distress and conflict, and oxytocin, that allows us to empathized and connect with the characters in the story. As explained in the video by Paul Zak, those stories that follow a dramatic arc have the ability to influence the listener to be “more likely to donate money generously to a stranger”, which for non-profits can directly impact the results of your ask. What Sick vs Undeniable does so brilliantly is following one of the best known narrative structures: The Hero’s Journey. 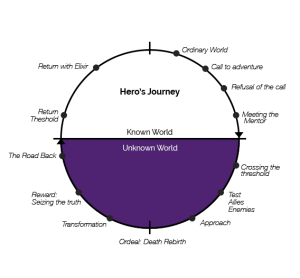 First described by Joseph Campbell, a mythologist, writer and lecturer, The Hero’s Journey is a narrative template that can be found in traditional fables and myths passed down from generation to generation in different cultures around the world. Even to this day, many blockbuster movies, including The Matrix, Harry Potter to Star Wars were all are based on this narrative structure. The video SickKids vs Undeniable uses this same structure.

We start in the Ordinary World where we’re first introduced to the hero: the kids of Sick Kids, who all face a similar Call to Adventure. In this story, it’s presented as a threat to life in the form of cancer, cystic fibrosis, autism, kidney failure and infant mortality. Next: the Refusal of the Call, when fears that need overcoming present themselves. Our heroes in the video don face paint, wear costumes and with strength and determination, they prepare for battle. Next, we Meet with the Mentor(s): the doctors, nurses and clown that give the hero something they need.

Crossing the Threshold is the Hero’s commitment to their journey an whatever it may have in store for them when they face off against Tests and Enemies. With their allies, they overcome each challenge. In the video, this is surgery and medical treatments our heroes go through on the journey towards their ultimate goal. In the Approach, the hero and newfound allies prepare for the major challenge. Now we’re in the operating room when we reach the Ordeal that results in death and rebirth. Our hero dies and is then resuscitated. The Reward is surviving, defeating the enemy and finally overcoming their greatest personal challenge. We see our heroes in the boxing ring and on the battlefield, victorious.

Finally the Road Back our hero’s continues their journey, bearing some element of the treasure that has the power to transform the world as the hero has been transformed.

In the end, SickKids offers the audience the ability to join the story and help the Hero’s in their fight with a strong Call to Action: FUNDTHEFIGHT.CA. It’s hard not to feel inspired to take up arms and join them as a soldier or left wanting to volunteer as a mentor that helps the hero in their journey. We can. By donating.

Well done SickKids! Your latest campaign is a powerful demonstration of the right way to use storytelling to empower and engage your donors!